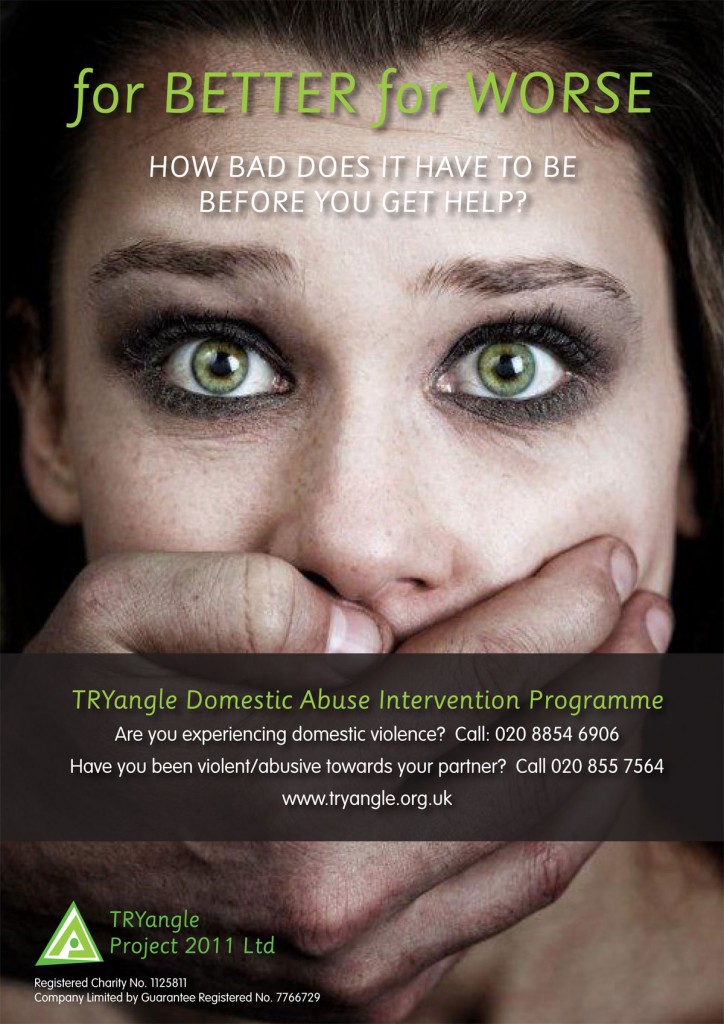 I recently finished judging the entries for the TRYangle Project Short Story Competition 2011, a project run by Excel for Charity. The TRYangle Project is a Greenwich-based charity, with an aim to increase the safety of families who experience domestic violence and abuse by providing programmes of group work and individual counselling for men and women in London and South-East England, and young people aged 13-18 years who are impacted by domestic violence. The competition was for previously unpublished short stories in English Language on the theme of ‘Domestic Violence & Abuse’ up to 1,500 words long, and was created particularly for those who have been affected by domestic violence or abuse as the victim, as a friend or relative of the victim, as a caregiver to a victim of domestic violence, as a friend or relative of the perpetrator, or simply as a social observer affected by media reports of domestic violence and abuse.

Reading the entries for The Tryangle Project Short Story Competition 2011, I was impressed by the thoughtful treatment of the subject matter and I was deeply affected by some of the more heart-breaking stories.  With such a range of voices and settings explored, it was a difficult task to choose winning entries, but those I have chosen are all by skilled storytellers who create convincing points of view.  They draw their characters sincerely and with care, weave poignant insights into immediate narratives and include small telling details that bring their stories to life.

The First Prize Winner, ‘Losing Benjy’, is narrated by Tommy, a boy whose family is destroyed by his mother’s abusive boyfriend.  The story uses imaginative imagery and fresh language that are nonetheless convincingly the words of a young boy.  All the characters are persuasively suggested through down-to-earth, realistic dialogue and interactions that are tender and brutal by turns.  The challenging theme is adeptly evoked with telling details and throughout, there is a sense of startling and ultimately terrifying insight.  It’s all too easy for the reader to connect to Tommy and to feel what he’s feeling right up to the painful ending.

In ‘The Waiting Room’, winner of the Second Prize, a young Zimbabwean woman named Rutendo seeks asylum after an act of aggression devastates her family. Beautifully written, this story evokes Rutendo’s intense loneliness and explores the different ways in which violence affects our lives.  Using delicate imagery that offsets the subject-matter, the writer represents the brutality caused by oppressive political regimes, by the state acting against individuals and by nature itself, as well as by the way ordinary people treat each other every day.  Through Rutendo’s poignant memories of home and her harsh experience of exile, we feel her alienation and all that she has lost.

The Third Prize goes to a compelling story about a man whose controlling behaviour has made his wife a prisoner.  ‘Hanging by a Thread’ is pared-down and economical in style, creating a taut structure in which the sense of fear is never diminished.  The writer experiments boldly with point of view, using first person to tell the victim’s story and addressing the abuser in the second.  This technique gives the reader a forceful sense of encroaching violence.  The metaphor of a spider in a web expresses the claustrophobia of the woman’s life and enables the writer to craft a bitter-sweet image of escape at the end.

The two Highly Commended stories, ‘Italia ‘90’ and ‘Small Black Flowers’ are both told from the perspectives of children.  Both use small details of everyday life to show what is being lost and create affecting central metaphors through which the theme is explored.  The five senses are well used in order to evoke, moment by moment, the tragic plight of child victims of violence in the home.